When we first got Toby and Tootsie, we knew that they were poodle crosses, but we didn’t actually know what with. We made a lot of jokes about how Tootsie was crossed with someone handsome and intelligent, like George Clooney (I’m assuming he’s intelligent) and Toby, well, Toby was probably crossed with a Minion, cute, and ‘Baa… Naa… Naa…’, if you know what I mean.

The mystery was revealed this week when we went through their papers in order to set them up for pet insurance (Hello Medibank, do you cover eviscerated Teddy Bears?). Tootsie is, of course, crossed with a Schnauzer, those cute little ‘old man’ dogs, which explains her hunting pedigree, effortless elegance and gorgeous gray coat. Toby, on the other hand, is crossed with a Shih Tzu. Which makes Toby a Shiht Poo, which, once again explains everything… sigh. 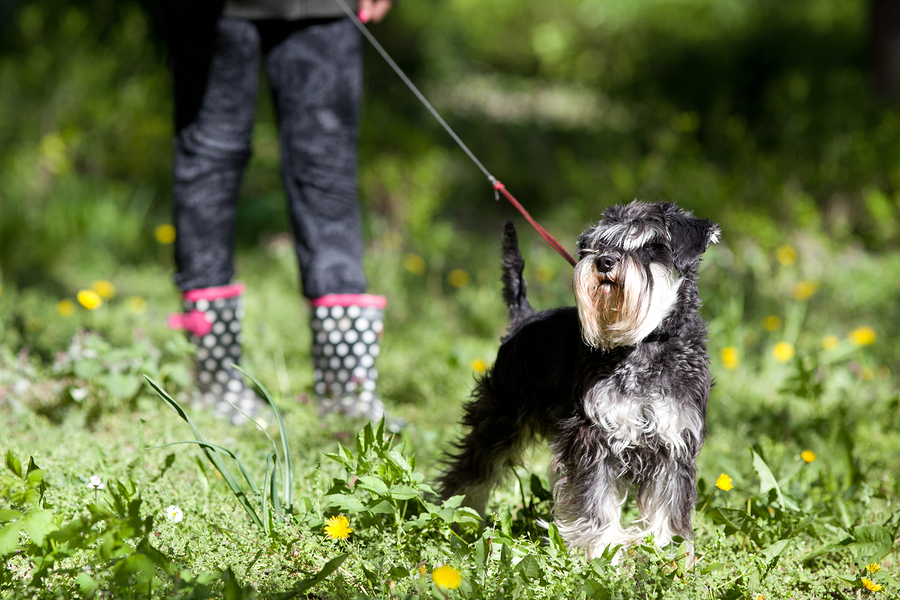 I thought we were making progress the other day – I was trying to train both the dogs to ‘Sit’, ‘Go up!’, and ‘Go down’. For Tootsie, this was revision – she’s got these three moves down pat ever since we got her. For Toby, this was summer school, if you catch my drift. He can now almost Sit on command, and I pray that he never confuses it with ‘Sh!t’ on command, otherwise it will be a very messy affair.

Anyway, imagine my surprise when in saying ‘Up!’, Tootsie immediately assumes the position, as usual, and Toby actually climbs up with his front legs onto the chair where I was sitting. The treats could not leave my hand quick enough to praise Toby for his progress, and he repeated it a second time, which was just the greatest thrill for me. Yay, we’re getting there! I thought. Maybe I am a good father after all! – my imaginary hands reaching all the way to my back to pat my imaginary shoulders. 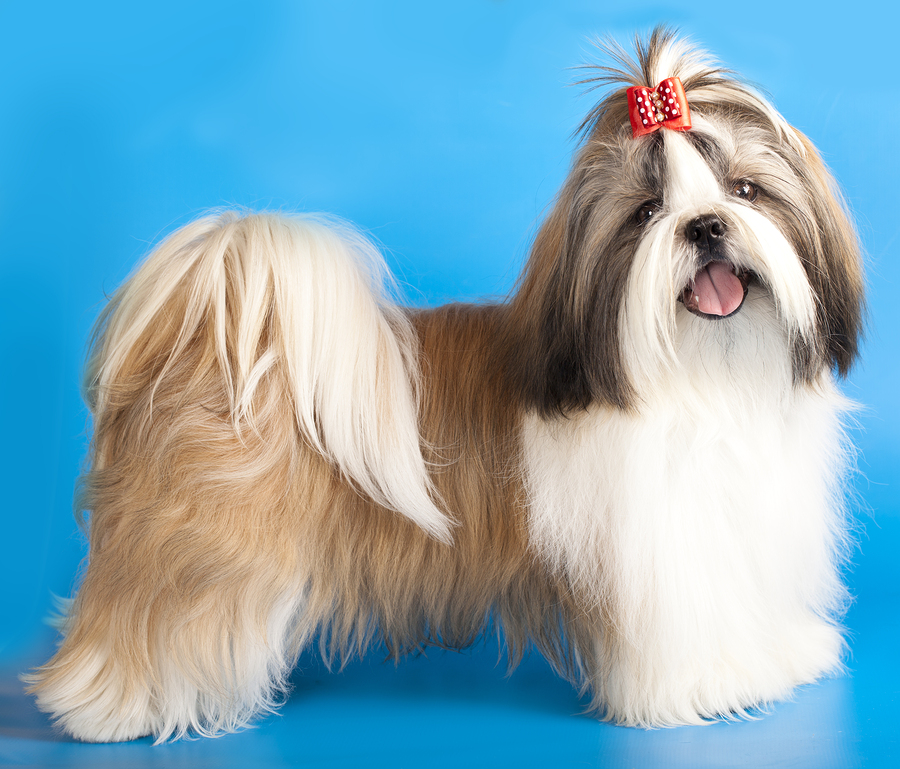 Even as I write this, Tootsie paws at me to come and play, and I oblige (being the tough, no-nonsense marshmallow that I actually am). We play a game of tug-of-war with a twice-dead rubber chicken, and I am trying to distract Tootsie so that I can throw the tennis ball for Toby to fetch. Toby has been actually playing fetch with the tennis ball of late, which is encouraging, but only if Tootsie is distracted. Otherwise, Tootsie is far too lightning quick for Toby’s golem-like reflexes – Schnauzer 1 : Shih Tzu 0 every time.

I am tugging hard at the chicken, right, and Tootsie’s eyes actually follow the ball while pulling at the chicken with the crazed ferocity of a caffeined-up multi-tasker. I throw the ball, and Toby goes after it. The ball lands behind a tin, out of sight, and Toby trundles back, confused. It’s gone! his open mouth says. It disappeared! Are you sure? I say, eyeing the ball from where I am. Yup, poof! No more! his open mouth says again. I facepalm myself with my non chicken-wielding hand.

I go to retrieve the ball, and I am reminded of a story I heard last week. A friend was telling me about his Uncle’s German Shepherd in India, whose name was Donkey. Why do you call him Donkey? he asked his Uncle. Because when we bring him to a park, and we try to play fetch, we throw the ball and we are the ones retrieving the ball, sighs the Uncle. Donkey just sits there without moving. 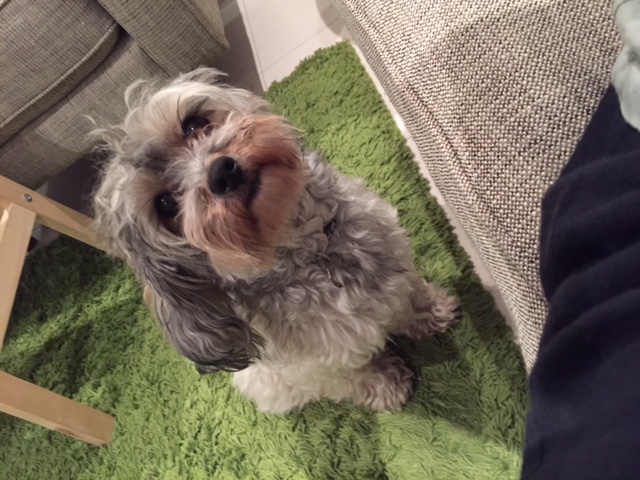 Part of the reason for Toby’s slow progress, I feel, is that Tootsie actually gets in the way of Toby’s learning. Tootsie is so hyper-intelligent and often so selfish, that she is the one who gets first dibs on all the toys, and the first to get to any thrown object, and she has not been one to include Toby in most of the play. We were hoping she would be more sisterly, but their relationship is like a bratty teenage girl picking on her two year old brother.

Which brings my mind to  Sunday badminton. We have a group that meets every Sunday to play badminton. Badminton, for the uninitiated, is the Asian version of tennis, except that this is tennis for ninjas. It is played with racquets and a feather-light shuttlecock, and requires lightning-fast reflexes, a strong wrist and dazzling footwork to be able to land the shuttlecock in your opponents’ court.

It is actually quite a good group that we play with, actually, with different skill levels and man, some of them are just a joy to watch, with their elegant net-play, their powerful leaping smashes and their confusing cross-court shots.

How good am I at badminton, you ask? Well, let’s just say that I am the Tootsie of the badminton world.

Oh sorry, did I say Tootsie? I meant Toby. I am the Toby of the badminton world, a lot of chasing after the ‘ball’ to little effect, setting up my body to smash and then catching wind with my racquet instead, a perpetually perplexed look on my face as I play. I have once or twice been tempted to pee on the court.

Because the court is booked for two hours and each game lasts only about ten minutes, we often mix and match players so that everyone gets a chance to play.

It is always difficult when there are mixed levels of experience and skill on the same court. I have great respect for the Tootsies of the badminton world who are able to Toby-fy themselves – they bring their play down to your level, their cultured wrists attenuating the strength of their smashes and they don’t care if they win or lose, they just want to make sure a good time was had by all. Of my group, all the players are of this mould, which makes for a fun Sunday evening. 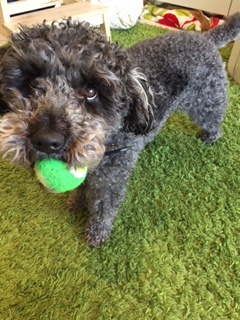 I have heard of, and don’t really understand, though, the Tootsies who remain Tootsies, and would snigger at your suggestion for a game, or who would attempt to murder you with their smashes (Cause of death: Shuttlecocked), or growl at you when you miss a shot. Hey dude, let’s pretend it’s Sunday evening at the Maribyrnong Sports College and not March at the All-England finals.

I do get it, sometimes, though. You want a good workout, you want to be able to play at your level best. You want to win. Well, there will be opportunities for that. I believe the sign of a true master is someone who is so comfortable with him- or herself that they are able to then forfeit this constant need for victory in order for everyone to have a good time and to encourage the weaker players.

Which is why when I look at Tootsie, I just wish that she was a little kinder and more inclusive to Toby, you know? Instead they get involved in these little dogfights (punpunpunpun) when Tootsie grabs at the tennis ball that poor Toby was trying to go after as well.

Ah well, we as the adults have to get involved, I guess. Toby is slowly but surely growing in confidence, and we actually had him grabbing at a toy with Tootsie the other day, which warms me right in the shuttlecocks. 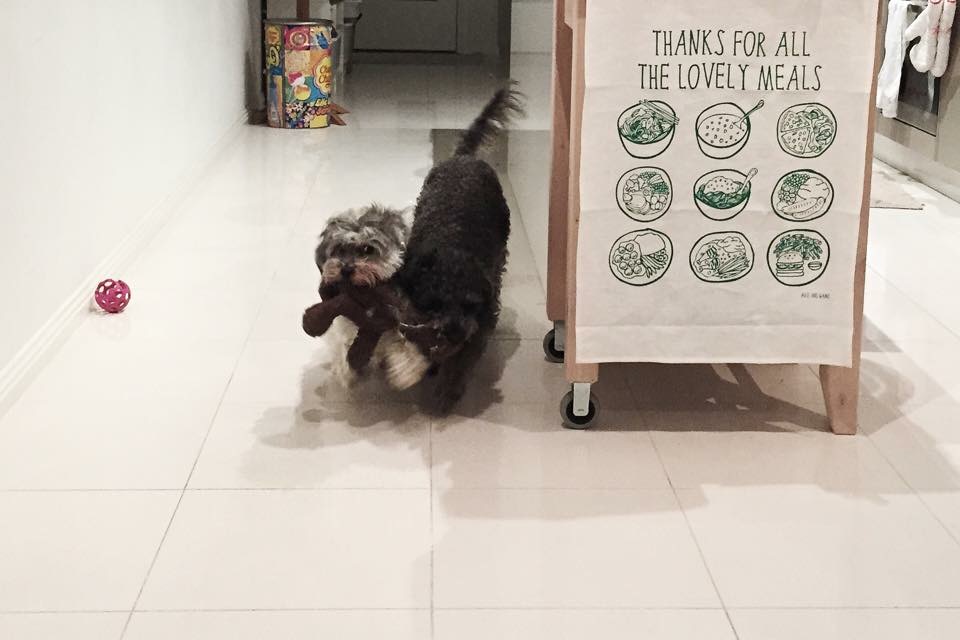