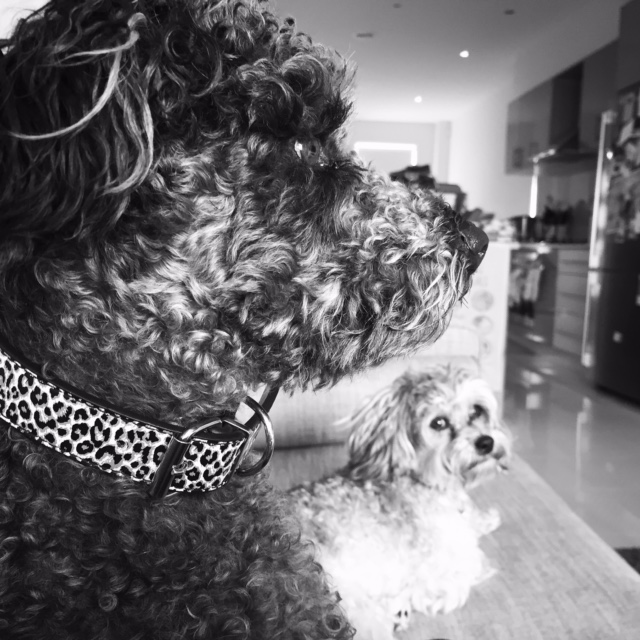 So if you haven’t yet met them already, say hello to Toby and Tootsie, our two new additions to the Cheok family. They are poodle crosses and rescue pets from the Second Chance Animal Rescue in Campbellfield. We were told that their previous owner was an elderly lady who unfortunately could not look after them any more.

Tootsie is the larger of the two, she is about 3 years old with an almost homogenous charcoal grey coat while Toby is 2 and a mixture of white, dirty grey and a smattering of brown behind his ears.

Both are vivid personalities in their own right – Tootsie is calm and clever, a great fetcher of the ball, while Toby loves to chase his tail. Tootsie is the more dominant of the two, and Toby totally takes his cues from her. She would be the first to any ball or toy that we throw, and Toby would join gamefully along but he would just be mimicking Tootsie without ever getting the toy.

Whenever we go out for walks, Tootsie would be bravely and independently exploring the Great Outdoors, sniffing at anything of interest, while Toby pretends to know what he’s doing and sniffs at whatever Tootsie was sniffing at. Oh yeah, this plant, oh yeah. Yup, I was totally about to sniff that first, Tootsie, he would agree. Whenever we get Toby to take the lead, he would take a few pretend confident steps forward – Yup, gonna lead the way now – and then three steps later he would stop and look up behind him as if to say – Erm, Tootsie, you wanna take over? – inevitably. 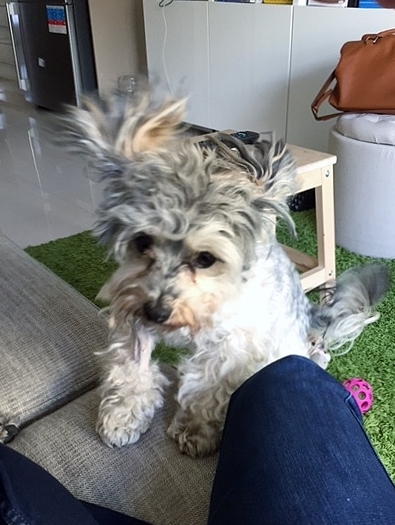 They are both highly curious and intelligent, assessing the world with their noses, their ears cocking to the slightest suggestion of a car passing on the outside, their extra sensory perception overloading into darting runs and excited yelps every time an unseen dog passes the front of our house. I’d like to say Tootsie looks after Toby, but we think she is actually a bit of a bully, which is evident when it comes to mealtimes or sharing a bed.

They are a bundle of crazy energy – bounding happily to see us on returning, be it from the outside world or our closed bedroom door, with all the enthusiasm and relief of a human person seeing a loved one return from the dead.

“Thank Dog I thought we had lost you, donteverdothatagain you hear me, ohweloveyousomuch, ohthankDogthankDogthankDog,” their little bodies seem to say as they almost knock us over and lick us to an actual salivary death.

They are extremely happy little creatures, and always eager to play, which is why I am confused by my own tiredness and even, dare I say it, sadness, yesterday. Safe to say, in both a pleasant and unpleasant way, our lives have been turned upside down.

Karen had to go away for a few hours for work yesterday, and man, what an anxious few hours it was for me, terrified I would somehow break Toby and Tootsie on my own (or that they would break every thing). It was rather incapacitating, and it was curious how stifled I started feeling in my own home.  I felt such a wave of relief when she finally returned home, and that now the responsibility could be shared.

I never quite grew up around pets – having Dad in a wheelchair and the three kids meant that there was little space else for any other creatures in our Malaysian home. From memory, we probably had a few fishes that unfortunately lasted all of one week before ‘doing the backstroke’ because we overfed them (when I open and close my mouth, that is the Universal language for “feed me”, silly fishies!) and I think I caught some fleas from a dog we had when I was being raised by my aunt in Penang for the first three years of my life.

Which is why yesterday and today was so hard – this was a glimpse into what the next 10 to 15 years would look like – mopping up their fluorescent pee from the floor six times already (but who’s keeping count?), picking up their poop by hand with inverted plastic bags, walking them twice a day and spending all this money on accessories for the food, treats and toys et cetera.  Sure, you’re happy to do it when it’s your own but it still takes a lot of getting used to, and it is a far leap for a guy whose only concern was what movie to watch this week and where to feed his own face next. 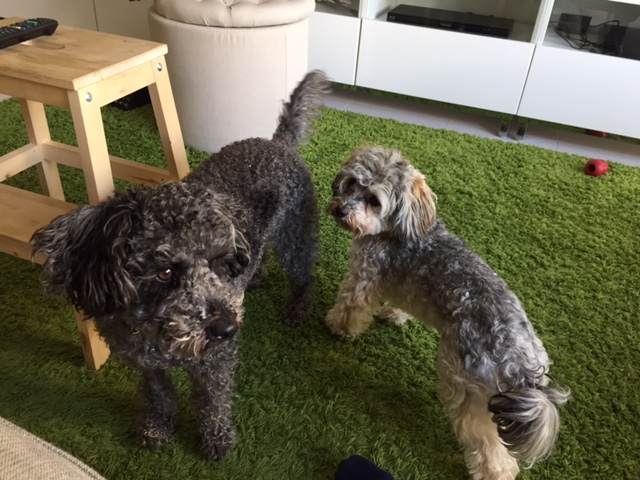 Greater than that, however, is the loss of independence – we now have these two little lives whose entire worlds are now in our hands and whose lives are intertwined with ours now – and so every trip out is tinged with the guilt of abandonment of the dogs (no matter how brief), exacerbated by Toby’s whimper designed by Mother Nature to reverberate at the same note that would break human hearts. Karen is so much better at being the firm parent and drawing boundaries while, me, well, let’s just say I am not only Good Cop, I am like Best Cop Ever. I hope they don’t grow up with Border(Collie)line Personality Disorders.

Haha! No, I am learning to be firm, too.

Of course there is the great trade-off of unconditional love – the eager pounding of tiny paws against wooden floors to greet you at the door after a long day at work, loving you just because you’re you (and not how you look like, what a wicked sense of humour you have or how much money is in your bank) and being smothered with enough licks to cover every stamp ever created in human history. Even that, however, is tampered by a sense of guilt when I cannot match their boundless energy and that look of disappointed boredom in their eyes when they have resigned to the fact that Daddy’s tired, or sad, today. 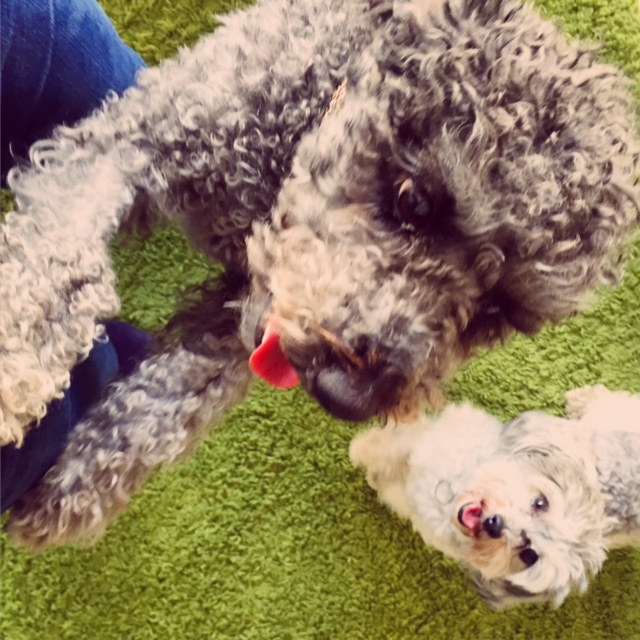 We all expect that parenting would be an easy thing, that we would take to it like a duck to water, and that somehow if we don’t, that makes us bad human beings.

We love the idea of being a parent – that we would bond to our child immediately, that our infant would sleep through the night effortlessly,  that they would take to our breasts (and by our, I mean, Kare… oh, never mind.) with such ease and effortless grace that other mothers would marvel from afar and give their little nods of approval.

Our children are going to grow up without throwing tantrums, never fall sick, be considerate and selfless in their interactions with other children and always say “Please” and “Thank You”. Our Naughty Corners would be gathering cobwebs and their curiosity will result in a developed mind rather than househould accidents and four-hour waits in the Emergency Department.

But like everything else in life, reality far outstrips idealism, and we end up guilty, anxious and defeated when we fall short of society’s or even our own standards of raising a child. I can only imagine the fear of some first-time parents, especially the mothers, who are afraid of breaking their seemingly fragile baby, whose ears and feet attend worriedly to every cry, whose anxious and guilt-ridden hearts prevent them from leaving their homes, turning their sanctuaries slowly into self-imposed prisons.

Parenting is actually a skill that needs to be learnt and – as I am reminding myself now – we need to be kind and patient not only to our children (human or otherwise), but also to ourselves. There is so much to figure out – we are both learning how to live with each other and love each other. We do not immediately become amazing parents overnight and neither do well-behaved children suddenly appear.

It is the borrowed wisdom of family and friends and the internet, the boundaries that we set as the adults in the relationship and the sacrifices and lifestyle adjustments that we make which ultimately feed into this blossoming relationship between us and the ones we are entrusted with. 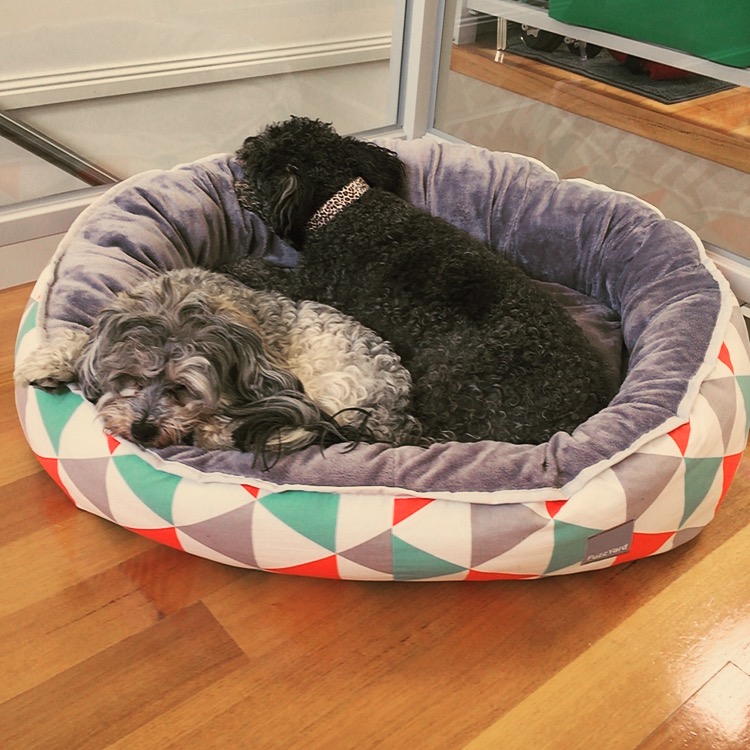 So yes, a few nervous first steps and mis-steps as fur parents to both Toby and Tootsie for Karen and myself. We are looking forward to the journey ahead with a mixture of excitement and trepidation – it will be fun, it will be difficult and we hope, ultimately fulfilling. May God grant us patience, wisdom and an endless supply of absorbent towels and antibacterial wipes as we learn to be good parents to the both of them, and in the process, learn more about ourselves.