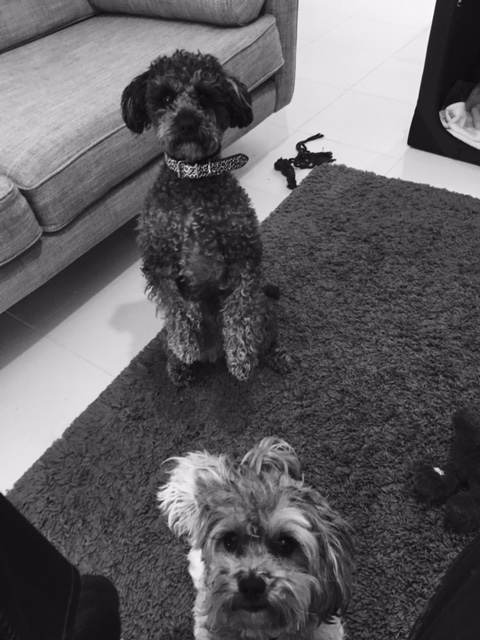 Tootsie and Toby have both been growing in confidence with every walk. In fact, together, with me as their leader, they think that we are some kind of a bad-ass gangbanger crew.

They walk with that assured swagger like they own the place, y’know? Tootsie (a.k.a Tootpac) and Toby (a.k.a the Notorious To-B.I.G.) goin’ round town with their head dawg, erm (quick, what’s a good street name for me?) The Original Hengster just rollin’ in our ‘hood, marking out our territory, yaknowwhaddImsayin’?

They bark like they are bigger dogs. They are not bigger dogs. In fact in the scale of the Dog World, I think they come in somewhere between Giant Rodent and Petite. But Tootpac and The Notorious To-B.I.G. don’t know that. 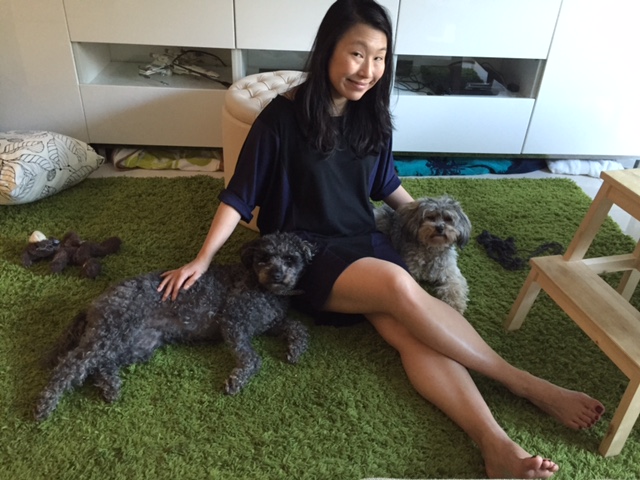 So me and my dawgs were just walkin’ the parks, y’ know? Just doin’ our thang, pissin’ on trees (the dogs, that is. I don’t piss on trees. I urinate on them.) and poopin’ everywhere (once again, just the dogs, ‘cos y’know, jail time for indecent exposure if I did it), and then suddenly Tootpac pulls at her leash. The Notorious To-B.I.G. is straining as well, because in the distance, there were dogs from the Rival Gang, y’know?

Let me paint you a picture of these dogs. These dogs were mean-ass Dobermans, black as night, standing the height of a human person and they looked like they had spent time in prison for killing other dogs (and maybe a human or two), you know what I mean? These were bad ass motherfather dogs, if you catch my drift. They just stood at attention, staring on bemusedly at these two little living mops yelping at them, while they silently sharpened their teeth.

Yo you! Hey you! Hey ugly! Hey stupid! Tootpac yelped. I bet my Dad can beat up your Dad!

Yeah you! Hey you! Hey! Hey! The Notorious To-B.I.G. echoed, with not enough vocabulary to throw any meaningful insults. My Dad, your Dad, bam!

And then I saw their Dad walk up to these three unleashed cold-blooded murderers – this scrawny Asian dude who I am sure I could have taken on, and maybe even beat the crap out of (at a game of Scrabble or Magic The Gathering ™ or something. Maybe.)

But it wasn’t Dad I was worried about. I looked at the dogs and I could already feel their teeth clenched shut against my neck (or worse, hanging off my googly bits) and a painful, bloody visit to the hospital with emergency doctors sniggering at the triage notes.

Come on, Tootpac. Come on, To-B.I.G. I said hurriedly. I, urm, remember a store we urm, have to rob, I said, trying not to sound like my testicles were riding high in my pelvis.

I had to pull hurriedly at the leash to budge the leaping, barking Team Toto away from these Canine Crips before they got killed, or actually, before I got killed. 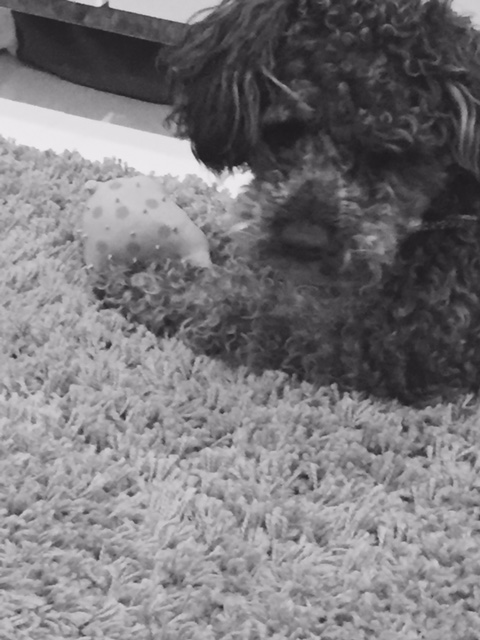 No sooner had I taken a breath when Tootpac and the Notorious To-B.I.G. started pulling at their leashes again and barking, and I ran along with them anxiously. What? What? I yelled. I looked behind me to see if the Three Horsemen of Death were chasing us.

Instead, to my relief, all the ruckus was actually caused by this pretty little snow-white Maltese dog bounding happily and quietly in front of her assured owner, who was jogging while dressed in a grey and pink tracksuit. She may or may not have been attractive. (I was too busy looking at the ground, ashamed of my two misbehaving gangster wannabes to look her in the eye).

Alright, calm down, dawgs. Don’t be goin’ all crazy over dem pretty ladies! Dem all just love you and leave you, you know. And you, Tootpac! You a girl, dawg! Be cool! was what The Original Hengster should have said.

Instead, T.O.H. just kept tugging madly at the leash and saying ‘Come on, this way!’ wishing that the ground would open up and swallow him up. Or perhaps, I could go back to the Three Horsemen of Death and let Tootpac throw a few more insults, and then, just, y’know, see what happens. 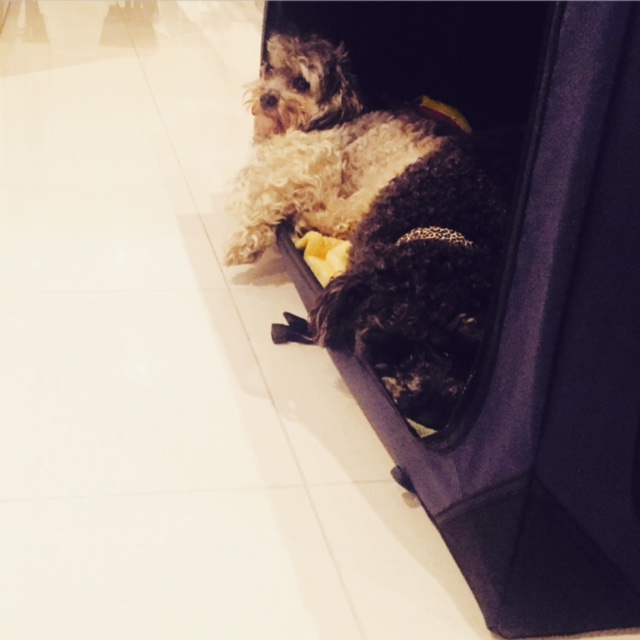 After all the excitement of dodging rival gangs and pretty women, we ended up in the third dog park in our area.

Tootpac decided that now was a good time for a poop, and so squatted to take care of business. T.O.H. was clumsily searching in his pocket for a plastic bag to pick up the poop in and was bending over to retrieve Tootpac’s No.2 when once again I felt a tug on the leash. I was half-bent with my plastic-bag semi-wrapped around the poop, when I looked up, and then, like a horror movie, I saw – almost in slow motion – my worst nightmare. An entire flock of seagulls spread across the park, begging to be chased down and barked at.

I could see it happening – Tootpac pulling wildly at the leash, Tootpac’s No. 2 (not the fragrance) flying up mid-air while The Notorious To-B.I.G. in all his clumsiness would position himself perfectly beneath my feet so that I would trip, and land face first in Tootpac’s Poop-pack.

My mouth almost closed into a slow ‘NOOooooo!!!!….’ imagining the horror that was about to unfold.

Mercifully, Tootpac backed down, and actually did not bark or run at the seagulls. She just stared curiously at them, and I gratefully walked to the dustbin and disposed of the evidence before pulling them slowly away.

Maybe this posse’s not so bad after all, I thought, walking now with my own swagger. Maybe they are starting to look at me like some kind of leader. Maybe I am The Original Hengster after all.

And then I tripped over The Notorious To-B.I.G. 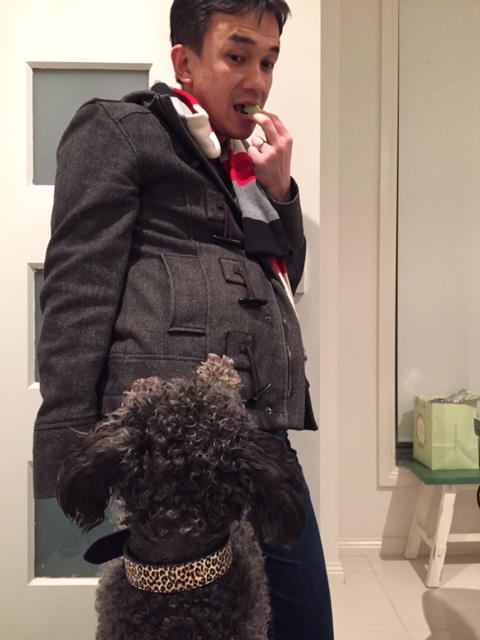 These dogs, these dawgs, these dogs. Sigh. They will be the life and death of me. They bark wildly at other dogs, this morning they ran blindly across the streets to bark at a family who had brought their young daughter, all dressed in pink, out for a scoot on her scooter. I almost had a heart attack! They were unleashed! Luckily they did not attack the girl, but even luckier was the fact that there were no cars speeding around the bend at the time. Otherwise this could have been a very different post.

My life has never been richer, I have never felt more loved, and the house has never been warmer, but man, with the good comes the difficult parts of parenthood as well, you know? You just get terrified that one day the unthinkable is going to happen, God forbid.

I hope we can get them to obedience school soon, and that we will finally socialise them enough so that we can proudly walk them outside, and they will be quiet and calm and well-behaved, just like the other dogs; and not flip off Dobermans three times their size who will use them (or my googly bits) as a chew toy.

The ‘hood ain’t what it used to be, youknowwhaddImean?